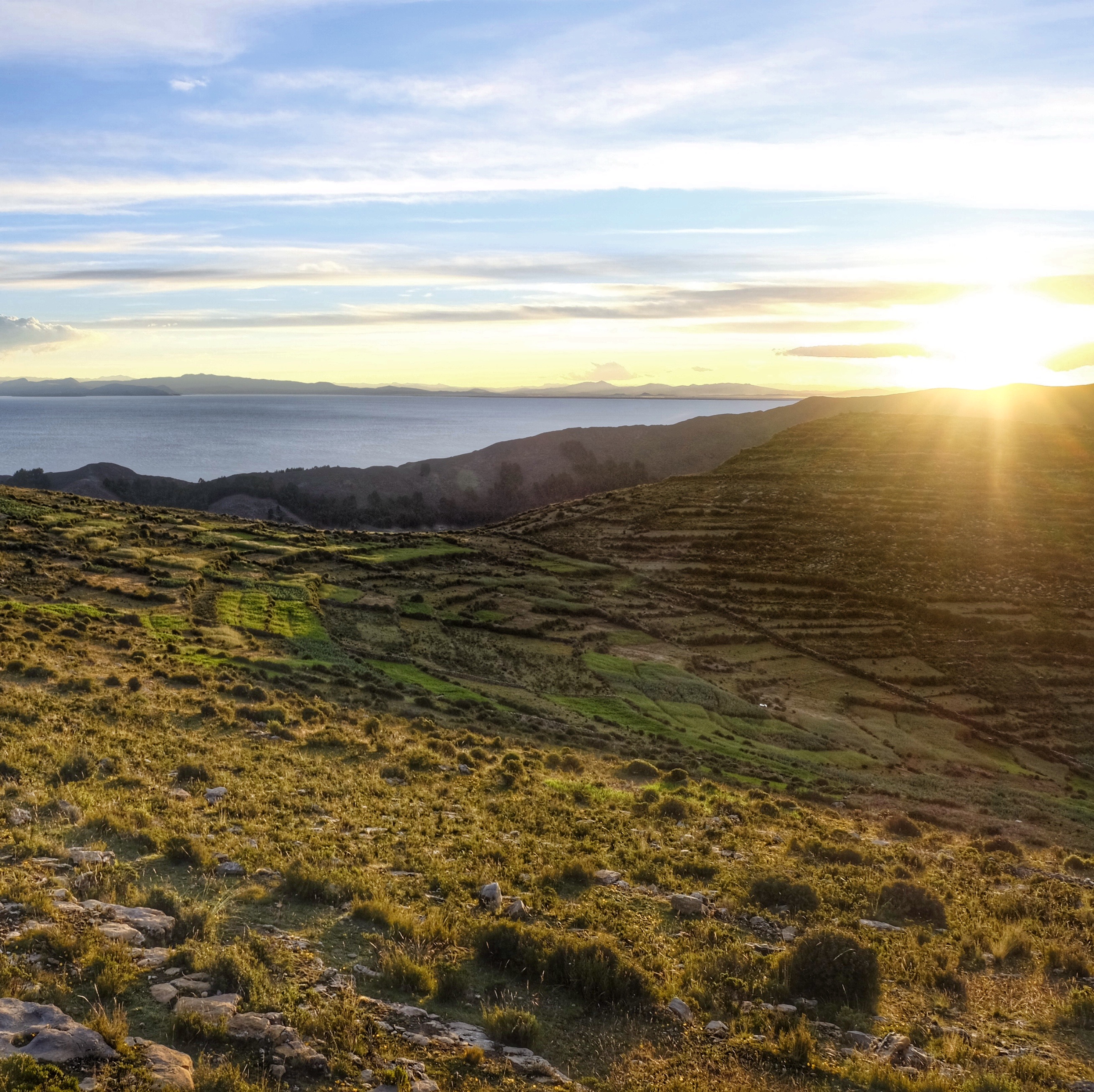 After a long day of busing and boating from La Paz, Lindsey, Stef, Doug and I were finally approaching Isla del Sol (Island of the Sun) on Lake Titicaca. We were all very excited. Not because we were expecting a bunch of lazy beach time. Isla del Sol is not that type of Island. We were excited because this is where it all began, at least according to the Tiwanakuan and Incan creation myths. According to popular theory on Tiwanakuan and Incan religion, Isla del Sol is where the world began, where the god Viracocha created the world, including the sun, moon, stars and humans. This is why Lake Titicaca is such a revered locale in both Bolivia and Peru (the lake is shared by both countries). And at roughly 12,500 feet above sea level, Lake Titicaca will literally take your breath away.

It’s not hard to understand why these ancient civilizations found reverence in this 6 mile long island, picturesquely located on Lake Titicaca, a two hour’s boat ride off of the Bolivian shore. Staring at its steep hillsides, lined from top to bottom with ancient Tiwanakuan and Incan agricultural terraces that date back thousands of years (the island is believed to have been inhabited since 2200 BCE), the aura of the place, knowing how incredibly important it has been for so many people for thousands of years, evokes a spiritual vibe. The terraces closer to the two main towns are still cultivated to this day with lima beans, quinoa, corn and potatoes, while most of the rest are covered in an assortment of plants and weeds. The island is only inhabited by roughly 80 families (we learned in the jungle that Bolivians tend to measure population by families, not individuals), the main two small villages being on the south side and north side of the island, respectively. The southern village, where we stayed is all built into a steep cliffside, while the northern village is mostly lake level next to a beach. The villages have electricity, but there are no roads or cars on the entire island. The steep paths you see in the photos are the only way people get around the island. Goods and supplies are transported via alpaca and donkeys, whose grunts sounded eerily similar to those of Sandpeople. However, these donkeys didn’t walk in straight lines to hide their numbers, so we really had to watch our steps to keep our shoes clean. You should be able to spot some of these nice asses in the photos. Most of the people on the island have satellite TV dishes and cell phones, but they still live simple lives, all seemingly working in agriculture or tourism, even the children were trying to sell goods to tourists when not in school.

Day 1: Taking it Easy?
As you now know, Lake Titicaca sits at around 12,500 feet above sea level, but what you didn’t know was that our hostel was another steep 800 foot or so climb from the docks. As a result, on our first day, we tried to take it easy, opting for a gentle one hour hike to some small Incan ruins. On the way back, however, we took the more challenging and fun path back, mazing our way below the trail through the terraces, with Doug the navigator. We definitely didn’t know where the official trail was, but scout master Doug valiantly lead us through. We finally made it to a ladder that would take us out of the terraces and into the base of town, but we had to pay the toll to the guardian of the ladder, a grumpy old lady who would only let us down if we would buy something at her restaurant. Our general policy is not to negotiate with blackmailers, but our stomachs were in control at this point, so we paid the toll. Our route, unfortunately, left us at the base of the island, giving us the opportunity to huff and puff the dreaded 800 feet again up to our hostel after a break for lunch in town. Maybe it should have ended there, but who can resist a good sunset? After a tiny bit of downtime at our hostel, we hiked up above our hostel another couple hundred feet to the peak of the island for a beautiful sunset. On the way up, we added a buddy to our group, Ana from France, who was gracious enough to snap a few photos of the group. Not quite the relaxing aclimatization day we had planned, but well worth it. We finished off the night with the common Isla del Sol menu, a choice of only 7 entrees (see “food” blurb below) and then some Heads Up (an iPhone shirades game) until the guy in the room next door pounded on the wall for us to stop laughing so loud. It was probably Doug’s spot on impression of a clam that did us in.

Day 2: Election Day.
The next day was the official Bolivian voting day for local elections. Unlike in the US, they vote on a Sunday in Bolivia to try to maximize voters. Unfortunately for the southern villagers, the voting booths were in the northern village, so many of them joined us in our long and hot 5 hour hike across the island towards the spiritual highlight of the island, the Chinkana ruins. Ana joined us as well, along with a funny random dog who we named “Solly” after Isla del Sol. I lost a lot of street cred that day predicting the ruins would be just over the next hill we were climbing. Eventually I was right, but I think it took about 10 guesses. The views en route to the ruins were great, but the setting of the actual ruins was spectacular, built into the top of the mountainside overlooking the lake. We walked through the maze of rooms in search of the still running sacred fountain which was rumored to be able to cure all bodily ailments once drank. Well, we all tried drinking it. The bad news is it didn’t really heal our bodies. The good news is we didn’t get Tiwanaku’s revenge from drinking it. The highlight of the ruins was seeing the archeological discovery made by Jim Westerman, Lindsey’s family friend. He found a natural face embedded into sacred rocks near the ruins which is said to be the face of Viracocha, the Tiwanakuan and Incan god of creation, and the very location where man was created. If you’re looking for it in the photos, you’ll see a V carved into the rock, the base of the V being the chin of Viracocha with the eyes, mouth and other facial features embedded within the V.
We then made our way down to the northern village, which had much more of a backpackers vibe with people tented out on the beach. The beach was perfect for a post-hike siesta and included some funny young Bolivian kids playing soccer as well as a pig sniffing around the beach, startling sleeping sun bathers. We liked the south village better, but lost Ana to the young smelly hippy vibe, and let’s just say she fit in well. We took the lazy way out and bribed some locals to boat us back to the south village (they weren’t supposed to work on voting day), but still had no way of avoiding the painful 800 foot climb back up to our hostel from the port. We finished off the long day by teaching Doug and Stef how to get Canasty, which quickly became the official downtime leisure activity of the trip.

Our hostel:
As I mentioned before, the southern village, where we stayed, is on a crazy steep hillside, with our hostel being at around 13,200 feet, affording some incredible views of the lake and distant snow-capped Andes mountains beyond.

The food:
Maybe this is actually a low-light, but it was kind of funny that every restaurant on the island had the exact same menu with the exact same 7 entrees: Chicken Milanesa, Beef Milanesa, Spaghetti, Pizza, Vegetable Omelette, Pejerrey Fish and Trout, served with white rice or french fries. This staggering array of options got us through the 4 days and three nights, but for Lindsey, it was just omelettes, french fries and rice every day, for every meal. It’s probably worth mentioning that the food on the island. and in Bolivia in general, wasn’t completely easy on the system. We went through quite a lot of pepto and prilosec, well except for Stef and her stomach of steel. Notwithstanding our gurgling bellies, we made the best of our time on the Isla.

Arizonans:
One fun sidenote was on our way out, we ran into a couple from Arizona couple who we met back in November in Chiloe, Chile who were planning to drive south through all of Chile, to the southern tip of the continent in Argentina, and then north through Argentina and the rest of South and Central America to Phoenix, AZ. Unfortunately, even though they had covered a lot of ground, they weren’t going to make it all the way back to the States in 9 months, so their new plan was to ship the car back and fly back from Columbia. 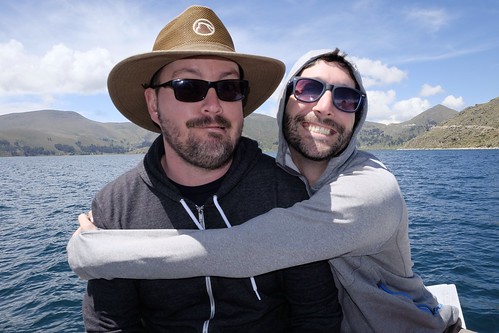 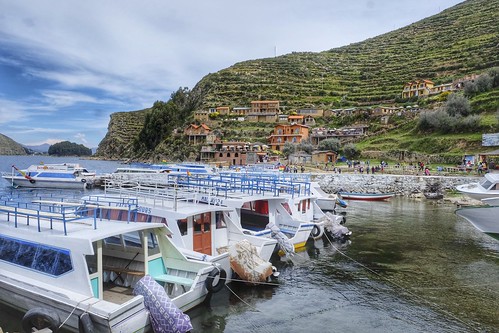 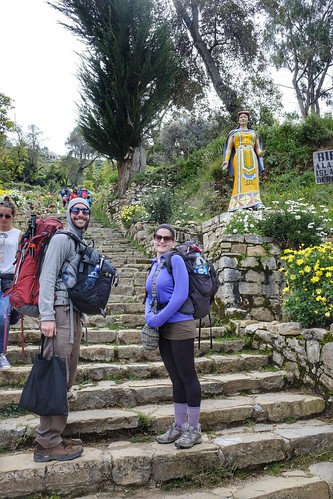 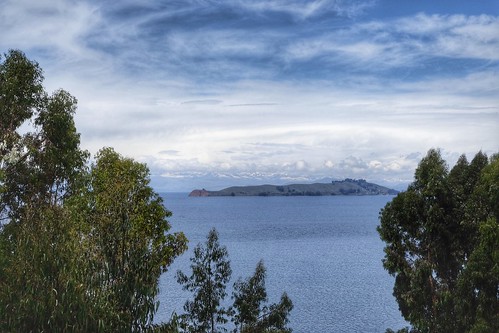 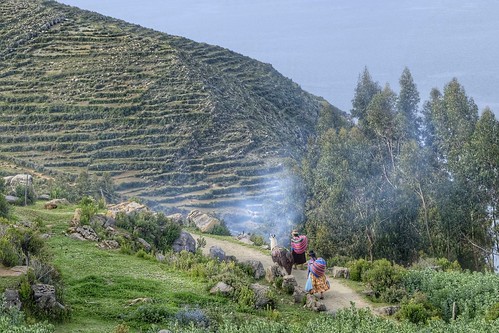 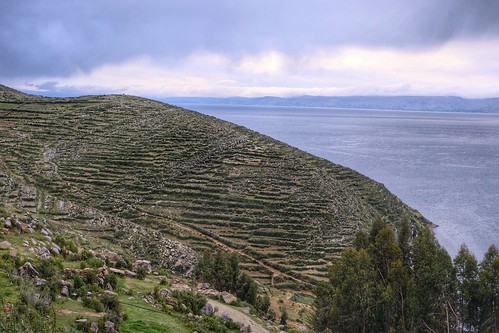 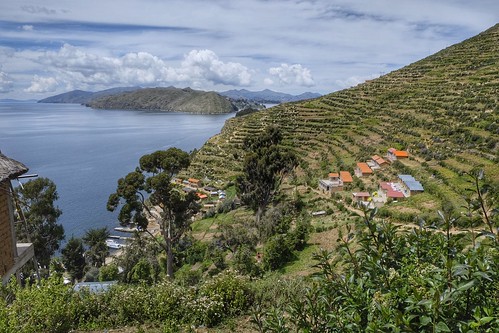 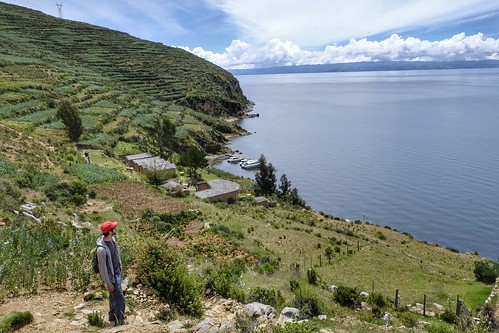 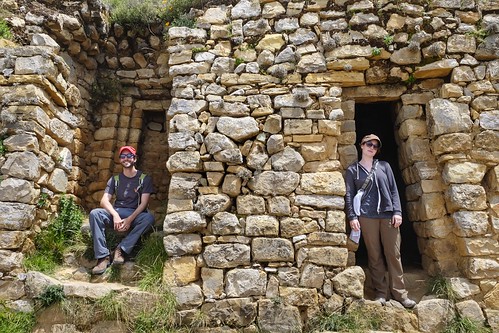 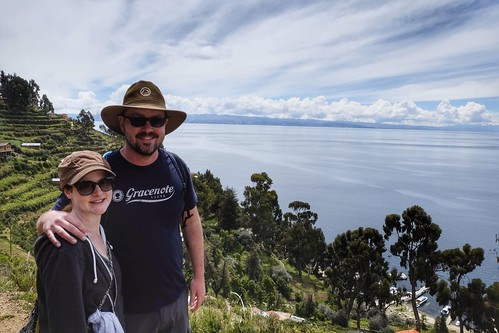 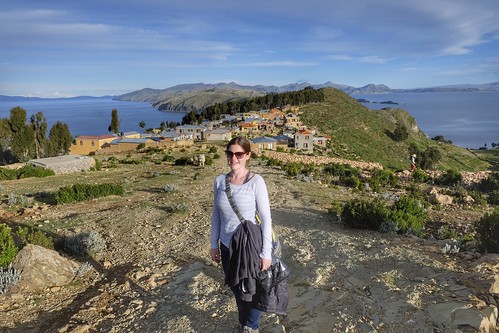 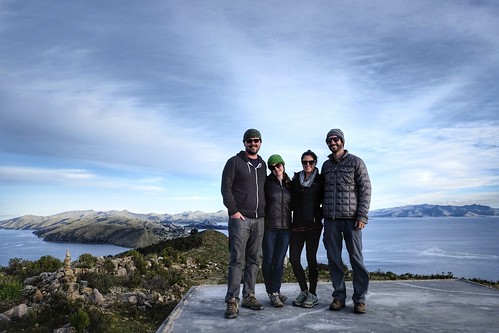 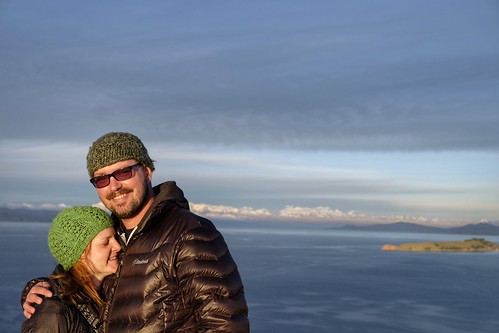 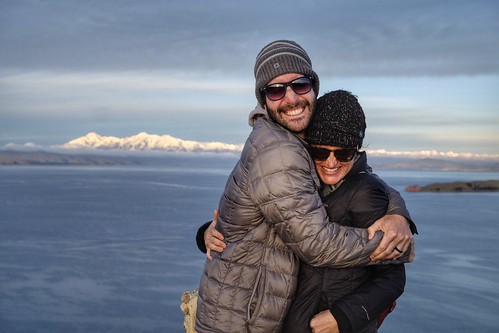 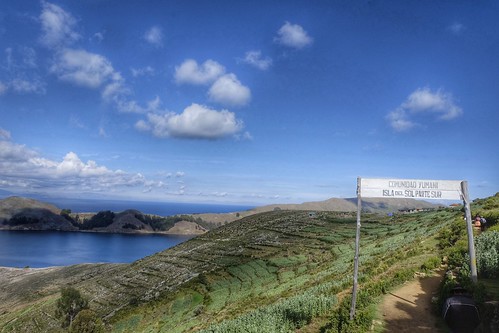 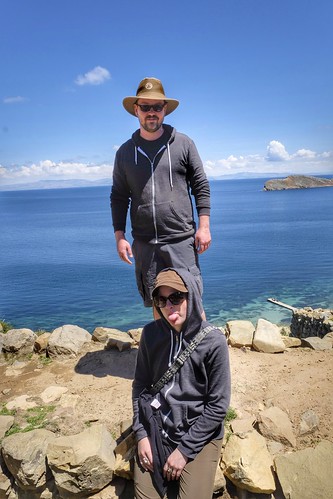 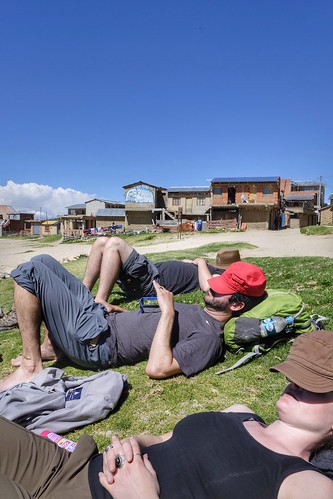 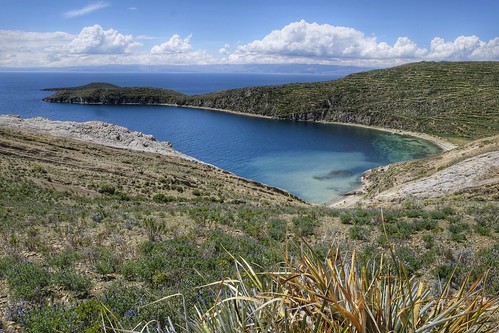 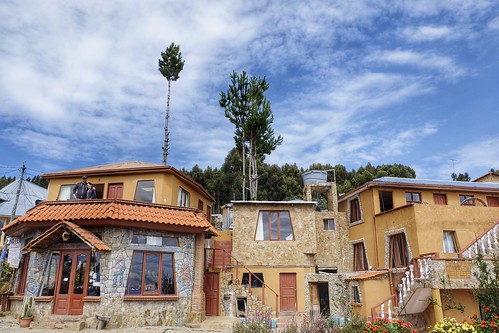 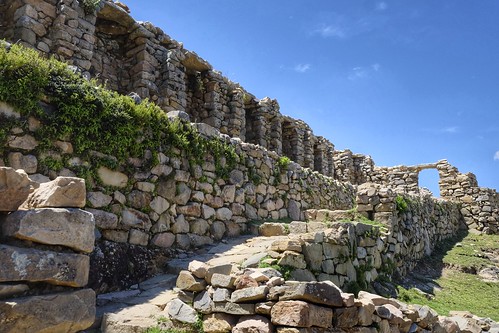