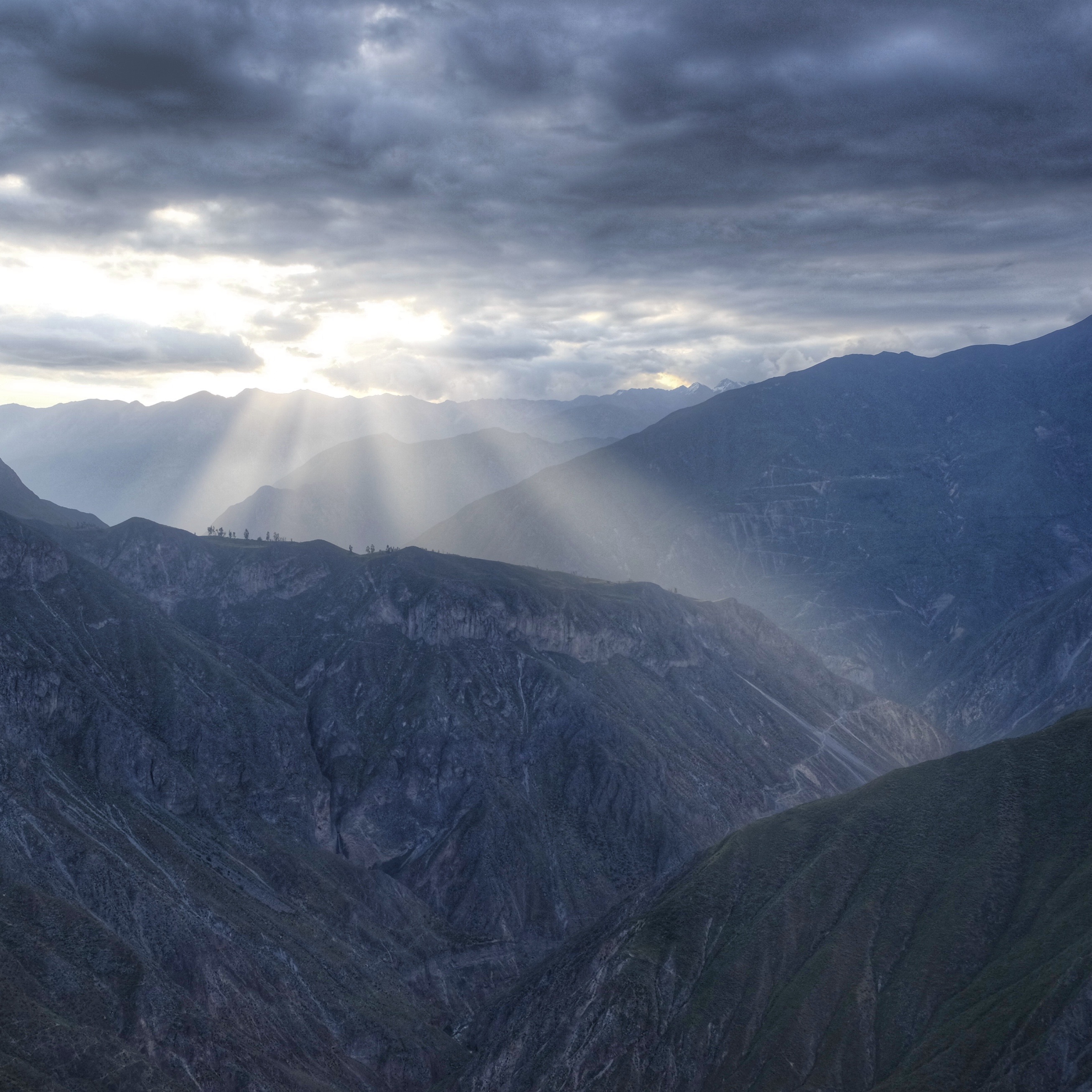 Earlier in our travels, we caught wind from fellow travelers of this really cool “oasis” at the bottom of a canyon near Arequipa, Peru where backpackers hiked down to the canyon floor to dip in water holes and hike from village to village. We did some research and didn’t come up with a whole lot more detail, but the few information sources we found all raved about Colca Canyon’s beautiful scenery, so we decided to go for it. For those of you that were like us and don’t know much or anything about Colca Canyon, the canyon’s deepest point is over 10,000 feet, more than twice the depth of the Grand Canyon.

Our entry into the canyon was from a small village called Cabanaconde, which sits at around 4,000 feet up the canyon. Our plan was to hike with our backpacks from the canyon edge down to a small set of resorts called the Sangalle Oasis, stay 2 nights, then continue hiking along the canyon to a small village called San Juan de Chuccho, and finally trek up the canyon the following day back to Cabanaconde so we could hop on a bus back to Arequipa. We knew the 4000 foot hikes down to Sangalle and up from San Juan de Chuccho weren’t going to be walks in the park, especially carrying our backpacks, but we figured we needed a Machu Picchu warm-up anyway so we decided to tackle it. As you’ll see we certainly got a “warm-up” and then some.

Getting to the Cabanaconde trailhead took 6 hours from Arequipa, and required us to wake up at 5 AM on the first day to catch the 6 AM bus that Ana, from our guest house, told us to take. Unfortunately though, bleary eyed and scurrying for 30 minutes around two adjacent and poorly organized bus stations with about 40 different bus companies, we realized that the 6 AM bus no longer existed. Just our luck, but typical Peru bus shenanigans. A 9 AM was the next available which we feared, and as it turned out rightfully so, as it would push our hike down into the canyon past sunset and into the dark.

After a very boring 3 hour bus station iphone Free Cell competition (although we did find a pretty solid restaurant in the station for breakfast), we were finally on our way. The ride quickly rewarded us for following though on our plan, an amazing sit and stare “bus hike” of its own. The bus first climbed to this incredible plus 14,000 foot mountain plateau traversing through a national park filled with lightly rolling hills with distant mountain linings, occasional lagoons, and packs of wild, roaming alpacas, llamas and vicuñas. And the succeeding descent down the mountain switchbacks on the other side afforded some awe-inspiring cliffside views of the beautiful contoured farming terraces below that bled into Colca Canyon.

Once over the mountain pass, the bus seemed to convert into a local bus, making frequent stops to transport locals from town to town around Colca Canyon, many of whom were dressed in unique, traditional garb. As predicted, we arrived in the small village of Cabanaconde, the location of the trailhead down to the canyon, way later than expected. We didn’t want to waste a day away staying in the village, so we braved the hike down, hoping it would only take around 2 hours, which would maybe get us in just before sunset. We should point out here that most people do this hike using a local guide and often ride donkeys down and/or up the steep trail, but we found enough details from a fellow backpacker’s blog that we felt good going the DIY (do it yourself) way.

The path to the trailhead meandered through wavy backyard corn fields picturesquely set in front of the canyon and the not-too-distant mountains beyond. The path was a little confusing, but with a couple small mis-turns, we found the trailhead and started our descent. The trail looked deceptively easy, but we quickly learned after the first few hundred feet of descent that the trail was all short steep switchbacks of donkey-smashed, i.e. loose, sliding gravel. And donkey travel isn’t light in these parts as it’s the only way to get supplies to the villages in the canyon. Thank goodness we brought our walking poles. We still regularly slipped and even had a few more-than-slips that involved butts touching gravel, but the sticks ensured these falls were slow and minor. As we descended and our calves and hamstrings began to ache and blisters began threatening my ever sliding toes, the sun got lower and lower and began to set over the canyon. We took infrequent quick breaks during our race against the sun, but the breaks we did take allowed us to look up from our intense step to step gravel-staring and enjoy the gorgeous sunset rays spraying over the canyon. The sun won the race, but we had covered a ton of ground and could see the Sangalle oasis (our destination) down the canyon throughout the hike; as a result, we only had about 20 minutes or so hiking down in the dark with our headlamps leading the way. Our legs were shaking by the time we arrived at the oasis, which it truly was one for us.

We stayed in the Sangalle oasis, which is comprised of about 3-4 small “resorts” each with its own set of rooms, dining area and food, for two nights. I can say without hesitation the “resorts” were very basic, a far cry from pretty much any sort of luxury. The rooms had dirt floors and it was clear after our two days there that they rarely, if ever, wash the sheets (thank you sheet liner we brought with). There were communal cold showers and no electricity. Meals were the same every night, veggie soup and spaghetti, of course with a bit of the rum we brought on the side. The swimming hole we heard about before arriving turned out to be a concrete pool, but it was surrounded by a beautiful green lawn and tropical garden. The pool was refilled with fresh, cold water every few days, which felt great during the heat of the following day as we took a few dips, continued planning the China leg of our journeys (which is ironic as we did heavy China research and I am currently writing this while in China) and explored the nearby canyon river and some of the abandoned resorts nearby. All of the resorts were crazy lush with beautiful flowers and a tropical feel.

After a day of recovery for our sore muscles and feet, we left Sangalle and headed across the canyon to San Juan de Chuccho. Getting there was a much more relaxing hike than the one down into the canyon, although it did have a few steep up and steep down sections. In the course of the day, we had a great lunch in a small village we passed through on the way which only had one restaurant, cruising through the path and soaking in the scenery until eventually finding ourselves at Posada Gloria, which felt similar to our place in Sangalle minus the pool. Again, we had a good, simple meal, played a whole bunch of cards and finished off our rum in the process.

Unfortunately, we may have overdone it on the rum, because when we woke up before sunrise (pre-heat) to climb up the 4,000 feet back to Cabanaconde (albeit on a different path), Lindsey was a bit hung over. I felt well enough, and the hike up the vertical switchbacks was still very strenuous. For Lindsey, it was borderline miserable at times, but she toughed it out big time and made it through the four hour hike back up. I don’t think she could have done it without our buddy Colqi tagging along, a really cute puppy from Posada Gloria, who as we learned, loves to take himself for a walk up the canyon with the hostel guests only to arrive at the top and follow the next group of backpackers who go down to Gloria’s. For a puppy, he seemed to be a bit of a snob, refusing our apple core and some water, but maybe he’s just in better shape than us. In any event, he was clearly having a great time smiling and panting with us on the way up. Another highlight of the hike up was a huge condor quickly flying over us, taunting us at how easily it could fly up and down the canyon.

I don’t think words can describe how happy we were to have made it through that steep uphill climb. When we finally got to the top of the canyon, our schedule was looking a bit tight for lunch before the next bus to Arequipa, so we hitched the last 30 minutes of flat walking back to Cabanaconde on the back of a small, rustic flatbed trailer being pulled by a motorcycle along with a few other locals and a dog. We were both happy because we didn’t want to walk anymore! I was so pumped for the extra time as I was able to chow down on a well-earned and needed hearty alpaca stew, gravy and rice meal before the 6 hour ride back to Arequipa. 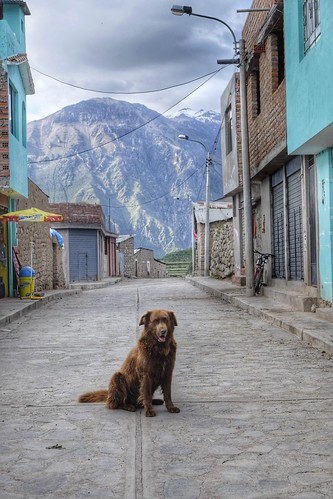 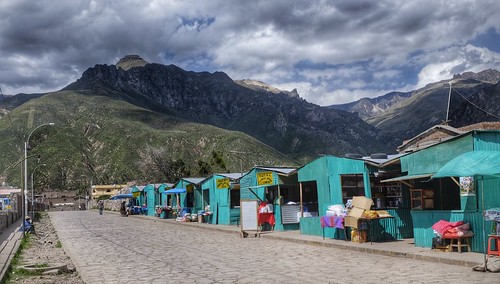 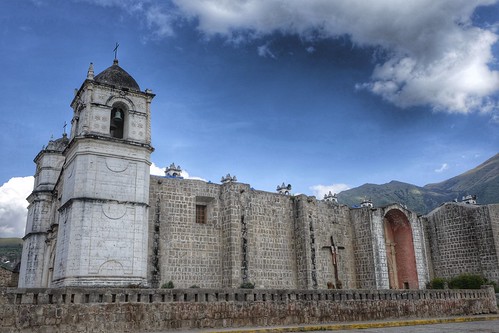 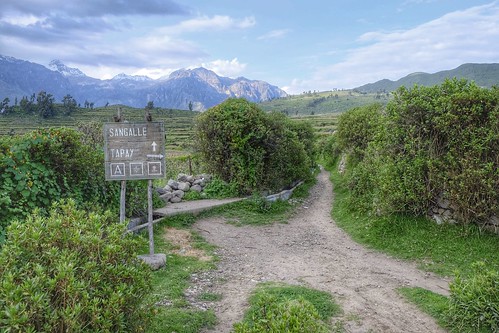 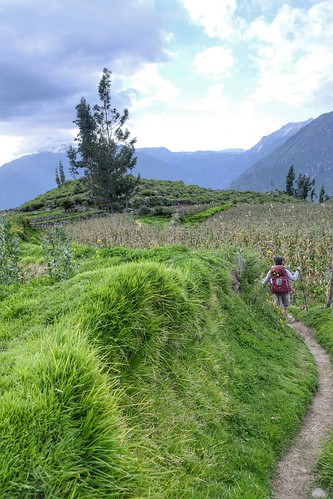 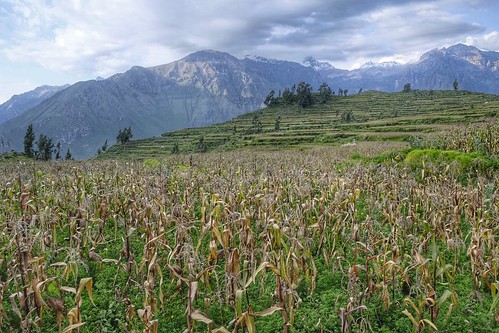 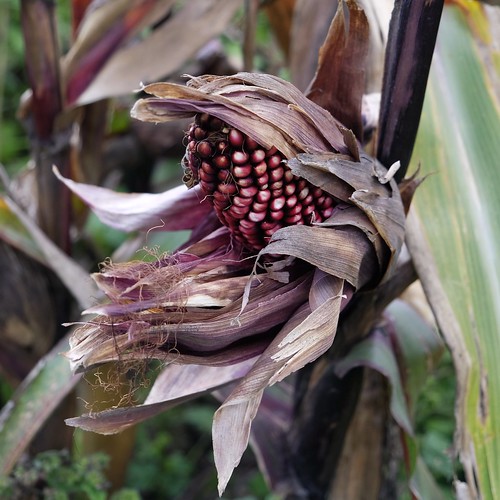 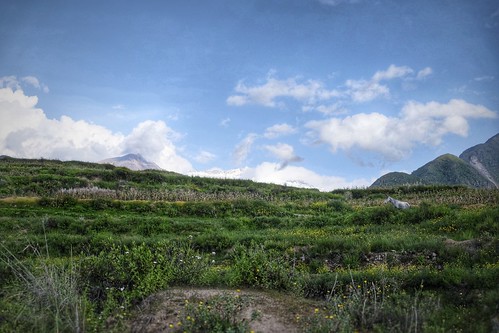 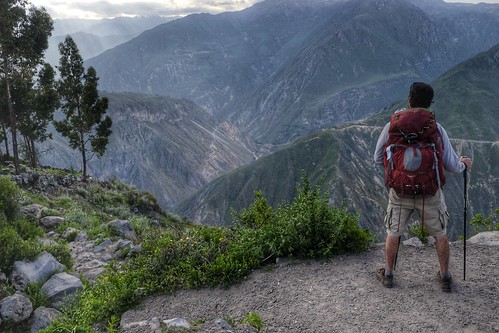 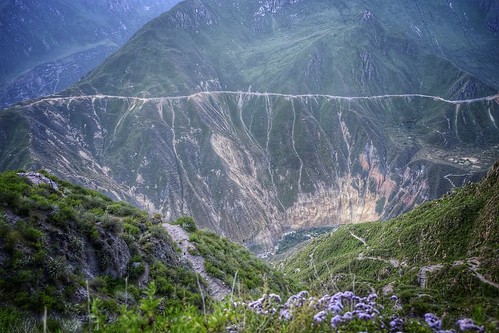 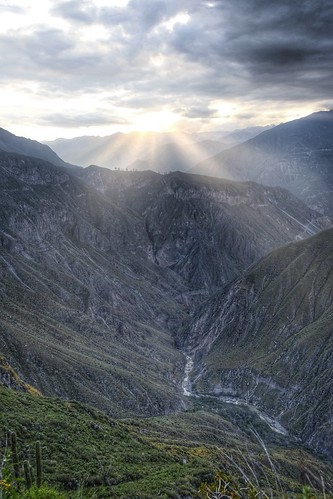 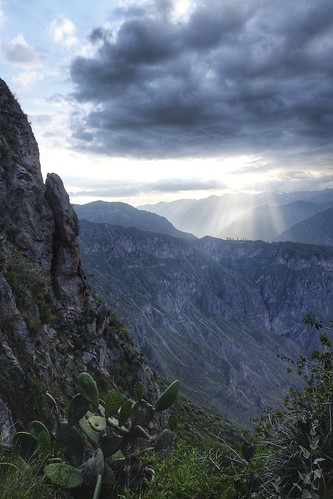 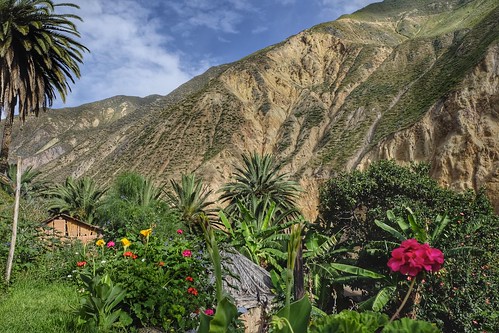 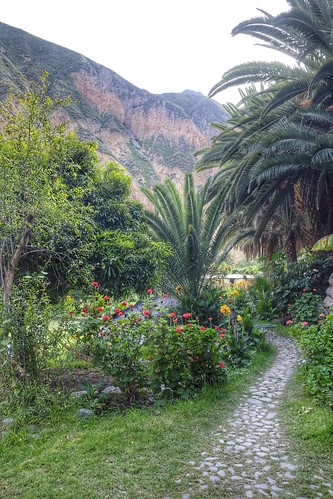 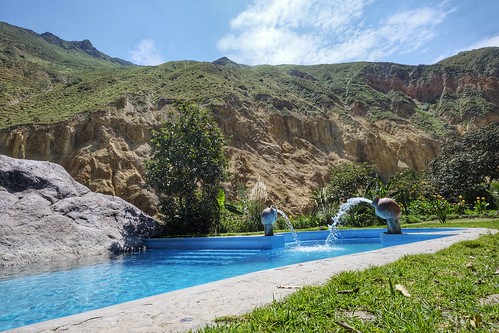 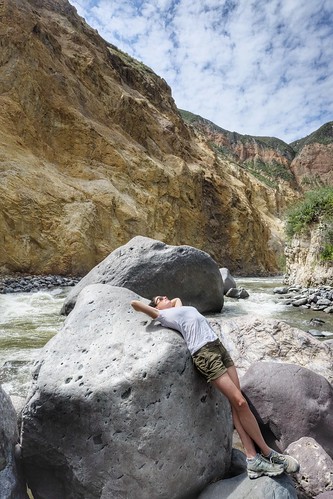 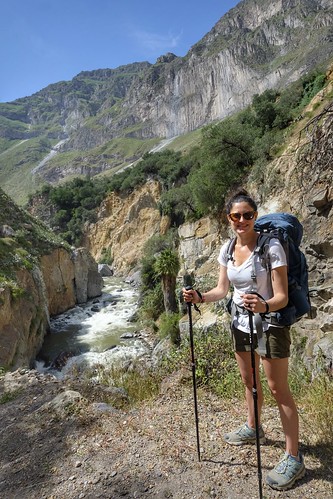 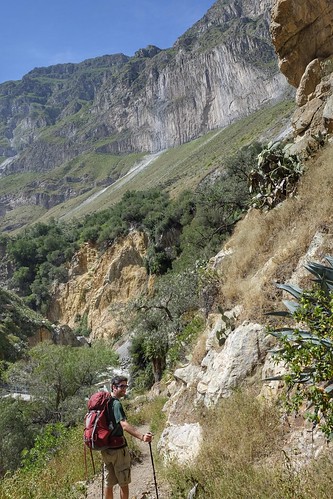 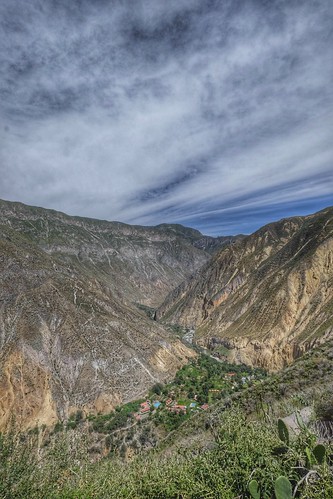 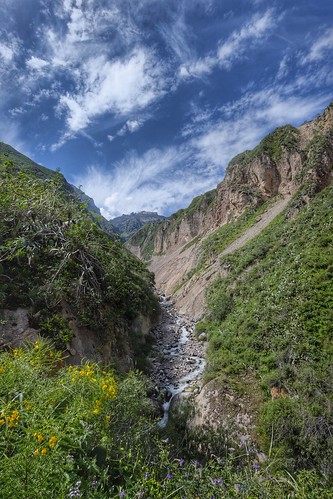 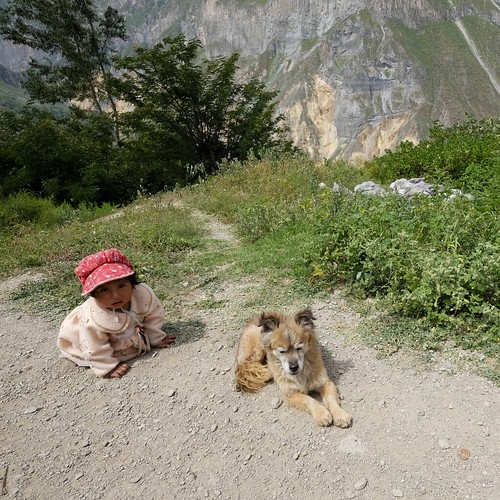 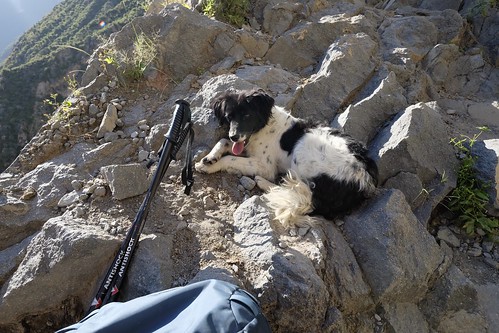 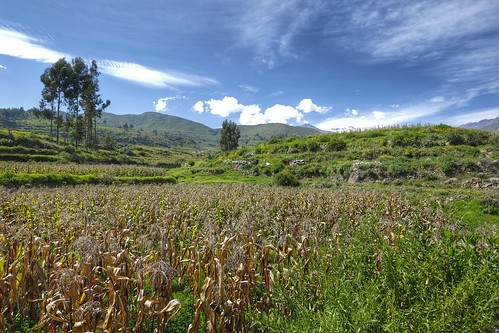 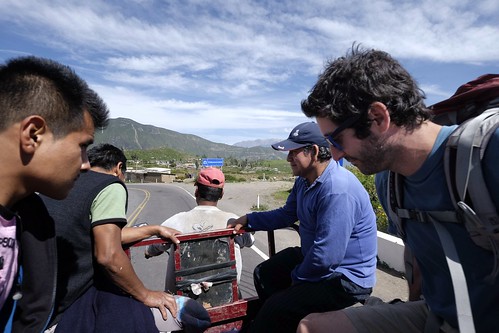 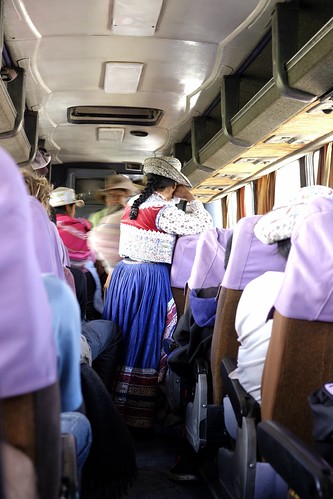 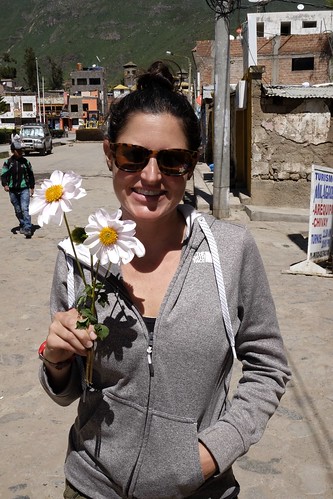 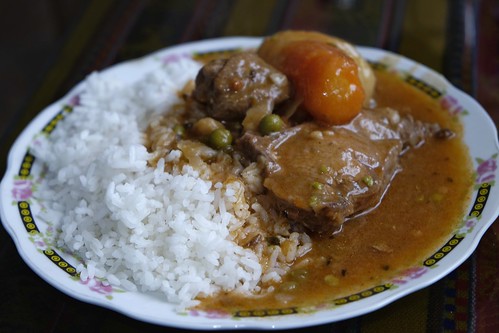