Koh Rong, Cambodia, is a small beach island in the Gulf of Thailand.  Google it and the image results will show long stretches of idyllic white sand beaches and blueish green water, and beach huts with thatched roofs and signs that say things like Paradise.  Well, I’m sorry to be Debbie Downer here, but if you are planning a trip to Koh Rong, you should know that Google images can be deceiving, very deceiving.

We so badly wanted to take in some tropical beach time to end our final week in Southeast Asia, and so we did do a fair amount of research into where exactly to go in Cambodia.  Throughout our 6+ months of traveling we had yet to do a total beach getaway, and we were finally making time for one.  There was some fair warning in my research about garbage on beaches and over touristy areas along the coast of Cambodia.  But Koh Rong really seemed like it was going to be a winner.

We hopped a bus from Phnom Penh to Sihanoukville, a party town, beach town on the mainland coast.  Then took the daily ferry over to Koh Rong Island, about a 30 minute ride.  At first glance the coast line looked dotted with a handful of cute restaurants and cafe tables spilling out onto the sand.  But when we got off the ferry at the main town pier and started walking down the beach towards our beach hut hotel the vision turned sour pretty fast for me.  Sewer pipes stretched from the buildings on the coast straight into the ocean. The water surrounding the pier, which was also the center of town, was littered so badly and was polluted so much from the pipes that it was not swimmable.  As we made our way down the beach about 15 minutes on foot to our hut hostel, the litter and sewage got slightly better, but didn’t totally clear up.

We were greeted by a slightly angry Russian with a glass eye, the proprietor.  He actually grew on us during our stay but was a little freaky at first.  Our room was a very simple hut, with a bug net over the bed, moldy smelling sheets and my favorite type of bathroom, the kind with the shower head not in a shower, just hanging out in the bathroom right near the toilet.  We had some patio furniture on the porch of our hut, but it seems the smelly local dogs liked to sleep there, and so the cushions were pretty gross.

As you can imagine, Danny was probably in panic mode internally, as he watched my disappointment mount.  And not because he cared so much about all the litter and sewage pipes and moldy smells, but more so because he was going to have to deal with me on this disgusting beach island for 4 days.  But I vowed to give it a chance and so we put on our bathing suits and started drinking at the closest beach bar.

We had some nice relaxing times over the next few days, walking the beach and exploring town  (which was a strip of about 10 cafes and hostels right on the beach). Danny went for some swims, but I just couldn’t bring myself to swim there.  At night the small strip of cafes on the beach came alive with young backpackers and locals trying to lure you us their beach bbq party deal.  There were loud DJ parties too, but we took it easy and just laid low together.

During one of our days on the island we did have a pretty awesome adventure.  It turned out to be my favorite beach day of our trip and I did finally get to swim in some super clear water.  We heard from the glass-eyed Russian that the other side of the island was just one long, uninhabited beach.  He told us about a trail that would take us there in “30 minutes” and so we set off, unsure of what to expect.  We hiked up past a few small houses, and continued up and up to the top of a hill until the trail started to fade.  The hill was grueling in the heat and we were definitely hiking for more than 30 minutes, more like an hour and a half!  We somehow managed to trail blaze our way downhill and we started to hear construction equipment.  We popped out of the trees onto a beach where some sort of major construction was just beginning on the shoreline.  There was a gauntlet of mud separating us in the jungle and the beach we had been hiking hard to reach.  There were a few workers just hanging out, but we walked on by, directly through the mud.  Our shoes sunk straight in and the mud went up and over and into our shoes.  So now we were sweaty, muddy and pretty much lost in some sort of strange construction zone on the other side of the island (we later learned that the construction was for some sort of giant Chinese-owned resort).  But we kept walking and sure enough the beach view opened up before us and there were miles and miles of completely open, empty, relatively untouched beach!   It was gorgeous and we were excited to swim and clean our shoes off in the water.  As we continued to walk and frolic, we realized we were the only people in sight and all we could see was one sign up ahead for maybe a hostel or hotel and then some sort of village way off in the distance down the beach.  When we reached the hostel it seemed to be absolutely empty, but we walked up some outdoor stairs and saw they had a bar and managed to find someone there to sell us some water.  It was a lifesaver!  Through broken English, we also found out there was a resort further down the beach that had a restaurant we could eat at.  We couldn’t really see it yet, but we trusted it would be there and kept on walking.  Plus, hiking back to our side of the island, way up and over that hill, didn’t seem like an option.  Instead, we decided to take our chances that we would eventually find someone to boat us back over.

So we took our time swimming and enjoying our own personal beach.  There was still a little bit of garbage on the sand, but compared to the other side of the island, this was a pristine, long beach.  About 45 minutes of walking down the beach we saw a helicopter flying overhead, which we though was a very rare sight for Cambodia.  And then we started coming up on signs that said “No Photo/No Video” and large cargo containers and ATVs parked just off the beach.  Turns out we stumbled upon the Survivor Koh Rong set!  They had set up their production zone right on the beach and had probably thousands of dollars worth of equipment out there. It seemed like they had also made their own roads for the ATVs, probably to get camera equipment and such across the island to where they were filming.  We made it to the resort with the restaurant and turns out it was Survivor production central.  The show had rented out the entire resort, which actually did look pretty nice, a lot fancier than the side of the island we were staying on, and here we were, 2 straggly looking beach walkers starving, so excited to crash the party and get some lunch.

No one really spoke to us or made us feel out of place, which was nice, but still, no one really spoke to us.  It was quite strange.  Our waitress was nice though and spoke English so we got all of our info from her.  We definitely listened in on some conversations happening around us and watched as fancy speedboats came in and out of the pier close by, dropping photographers and video guys off.  We even saw the helicopter again.  What an interesting day this had turned out to be!  But the adventure wasn’t over yet, as we still had to figure out how to get back to our side of the island.  Our waitress told us that we could walk into a town a little bit down the beach and pay someone to boat us back.  She also said that tourist season was over so the village would be pretty empty.  That explains why the hostel we had seen was completely empty too.  So after lunch we continued our walk down the beach and with the Survivor basecamp just behind us we came across the sleepiest town we have ever seen!  There were small houses on the beach and houses on stilts in the water, and possibly a few guesthouses, but it was a challenge to find any people.  We finally came across a women who then fetched her teenage son who spoke a small amount of English and somehow we communicated with him that we wanted to pay someone to give us a boat ride back to the other side of the island.  He took us over to a pier where we found a group of men playing cards and drinking.  They had us wait for about 20 minutes or so and then finally one of them showed us the way to his boat and we were on our way.  He did charge us $20 for the ride, which was more than it cost for both of us to eat and drink for one day in Cambodia!

The next morning we had planned to catch the ferry back to the mainland and then bus back to Phnom Penh to fly out to Tokyo, Japan the following day.  But we woke up to an unfortunate call from my parents back home in Chicago.  My beloved Grandma Ruthie, who had been sick for some time with lung cancer, had taken a turn for the worse and they thought it was time we made our way home.  I was crushed by the news, but it was not unexpected.  When we were home for a few weeks in between South America and Asia I spent a lot of time with Grandma and just knew it would be the last time I would see her.  So as sad as we were to hear the news, I was so grateful for that extra time I had with her to say good bye.

We continued with our plan to ferry and then bus to Phnom Penh, and no matter the reason, I was definitely happy to be voted off the island.  When we got back to Phnom Penh we shuffled our flights and made plans for a quick few days back home in Chicago.  Grandma passed while we were on one of our flights.  When we got to Chicago the emotions and vibe were very raw for my whole family.  Grandma had been the glue that held the family together, a larger than life personality who lived a long, amazing life.  In her 98 years she survived breast cancer, skin cancer, and although lung cancer finally got the best of her, I prefer to think she died of old age.  After all, what a life and legacy she left with all of us.  I’m so glad that Danny got to know her over the last few years and she just loved him.  And she also loved her great grand dog, my furry child, Bacon.

I don’t think I want to dig up the emotion it will take to write a full tribute post to Grandma Ruthie.  She was the best, simply the best! 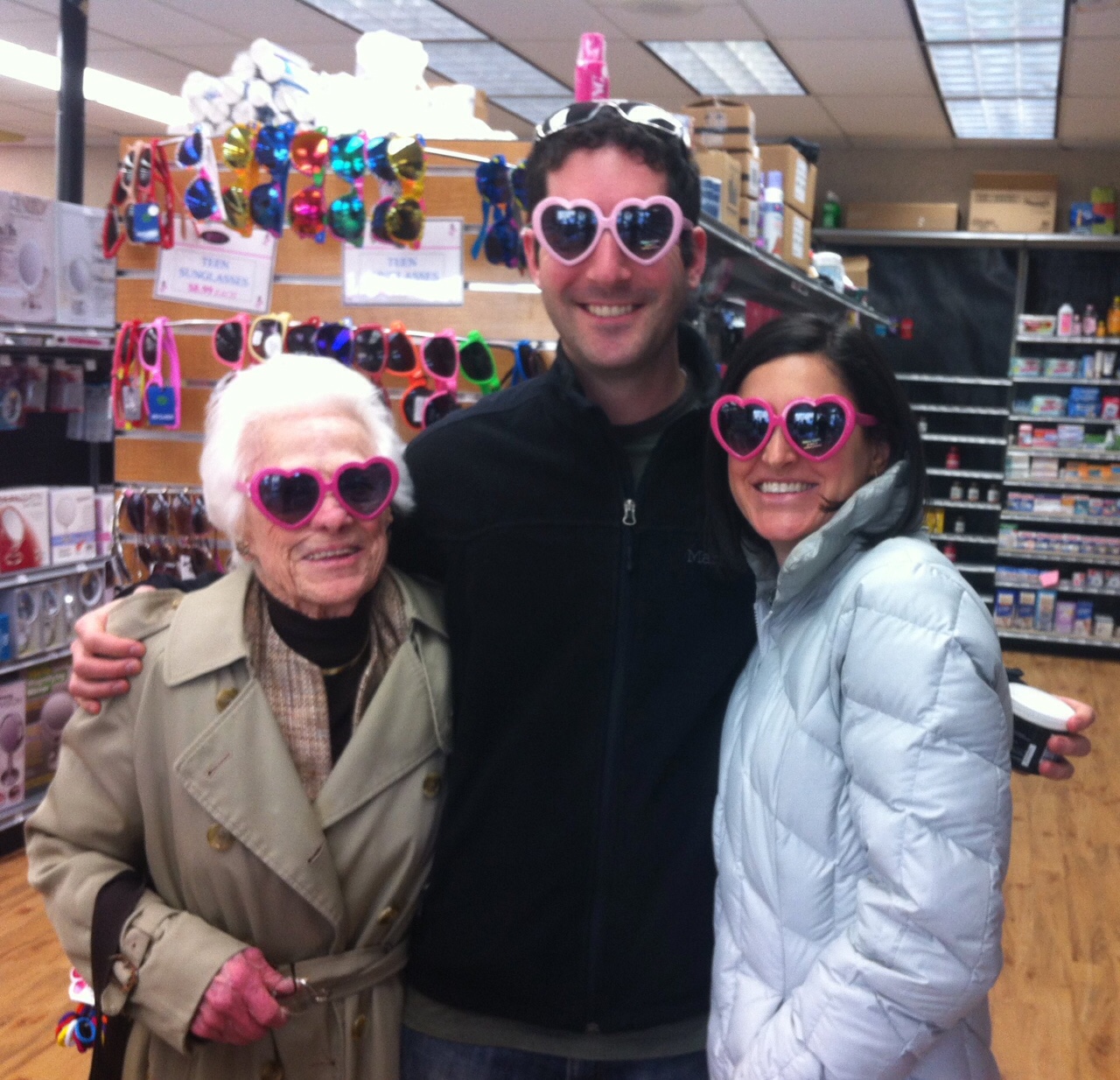 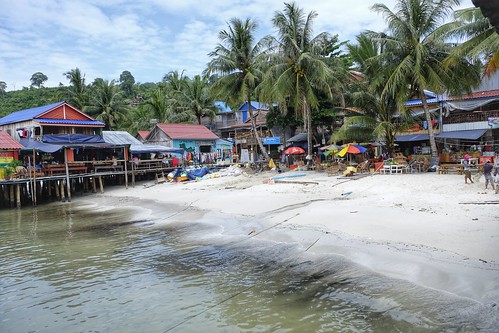 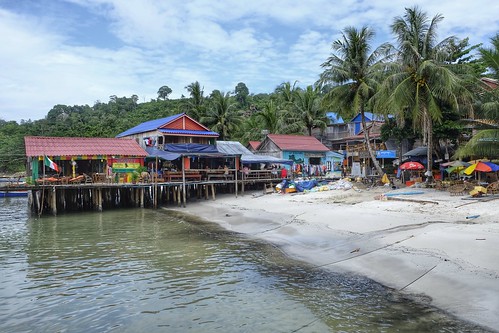 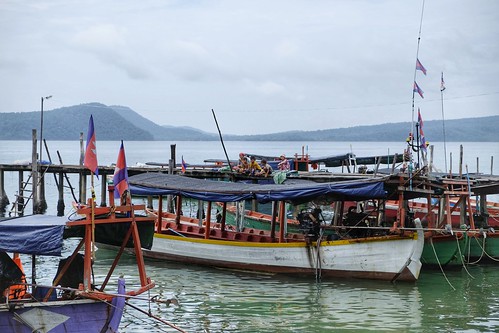 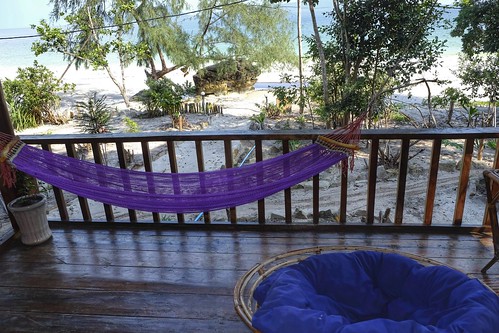 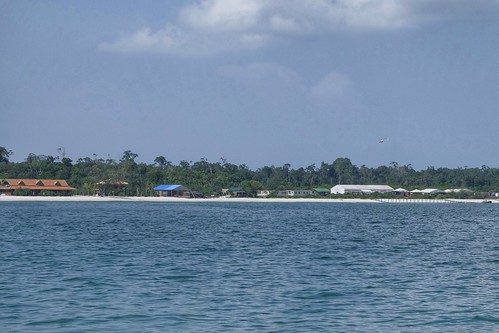 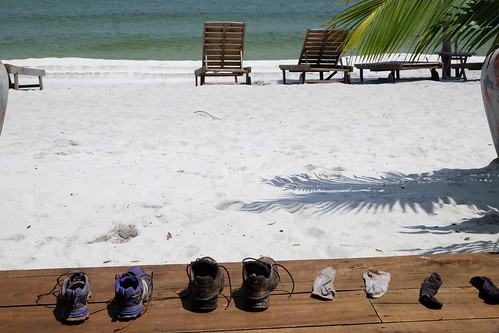 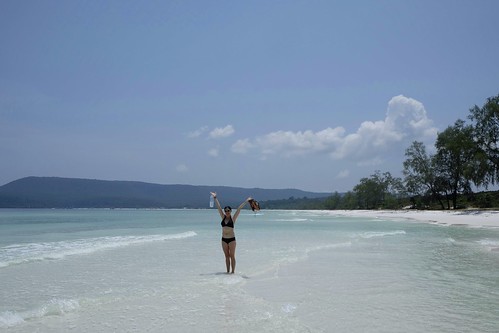 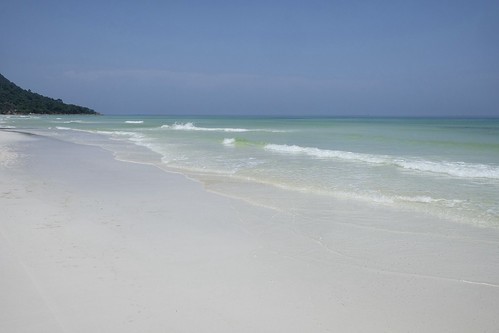 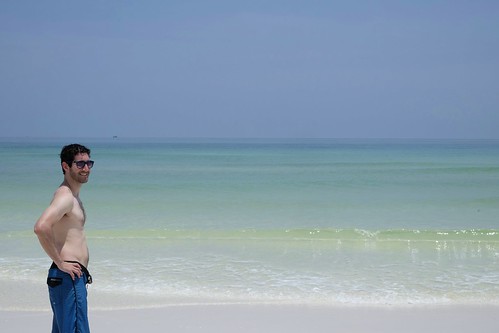 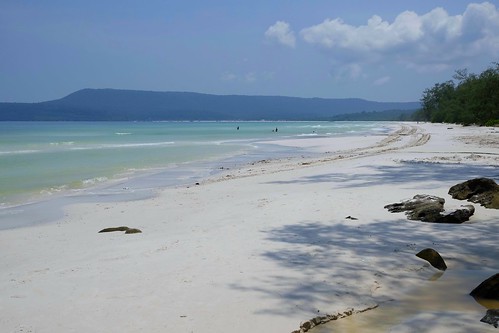 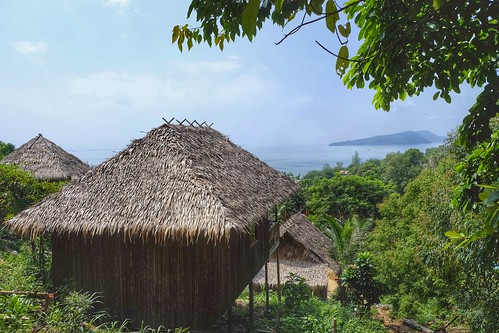 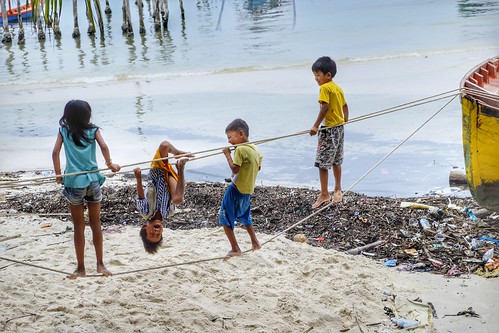 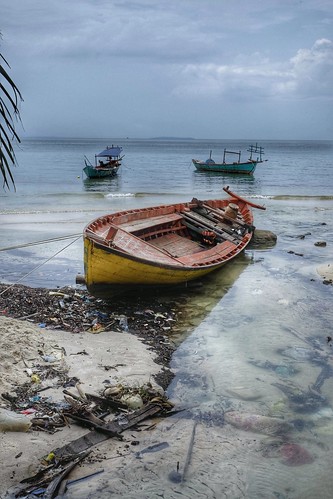 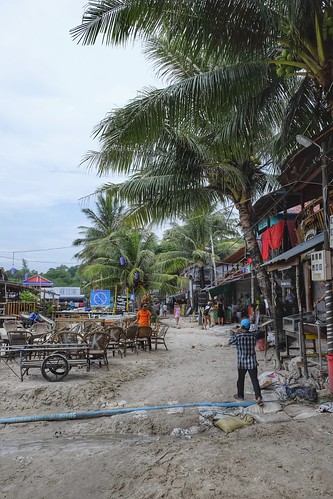 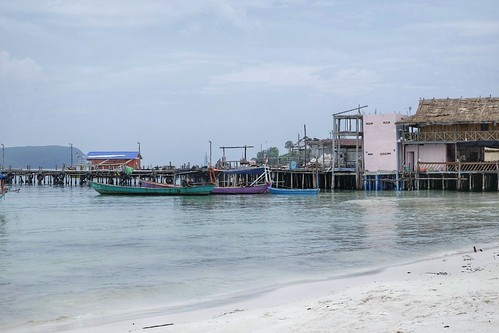 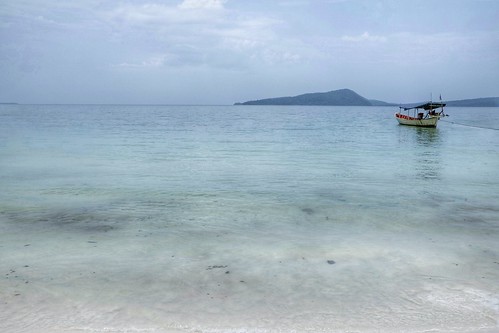 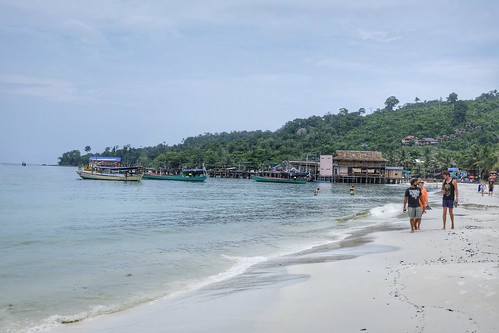 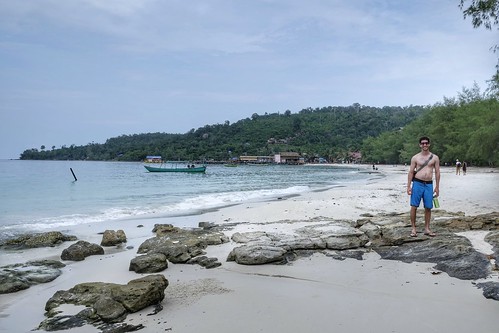 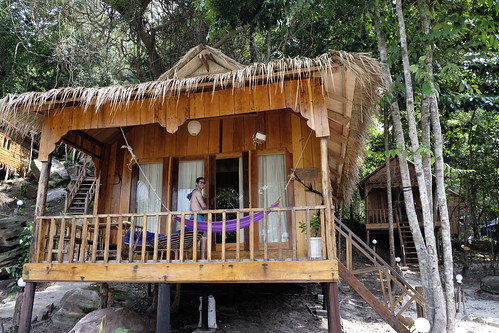 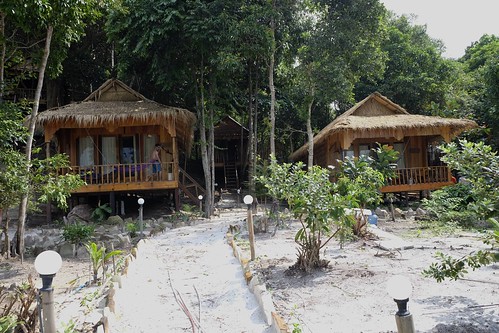